When it comes to cross-border payments, the biggest, and the longest-serving provider have been the Society for Worldwide Interbank Financial Telecommunication (SWIFT). Established in 1973, SWIFT tried to keep up with the changing world of global finance. Despite those attempts, it remains in its core a legacy system. Centralized around the US Dollar, it has been used as a tool of control “Limiting SWIFT access has been used as an economic-sanctions tool against Russia, Iran, and North Korea, as it’s still the dominant international payment network. It’s a centralized network, an industry-standard, so limiting access is simple”.

Read more: Could you be creating a legacy system for your customers?

From a usability standpoint, SWIFT takes up to a week to process the payment, and it charges a fee on each transaction.

Private entities typically are not in love with the government trying to impose their will for political reasons, and always look for the most optimal, and cost-effective solution available. These factors led the financial industry to look for a different way.

In 2009, a big shift happened. The first block of Bitcoin was mined by Satoshi Nakamoto, and the first blockchain was created. A blockchain is, in the simplest of terms, a time-stamped series of an immutable record of data that is managed by a cluster of computers not owned by any single entity. Each of these blocks of data (i.e. block) are secured and bound to each other using cryptographic principles (i.e. chain).

Upon creation, Bitcoin didn’t get too much press. Almost no one knew about it, apart from people deeply vested in the technology world. It was far from being mainstream. Over time, more and more people got into this space. It had its fair share of scams and connections to illegal activities, but at the same time, business people started to look for legitimate use cases for the technology.

At the end of 2017, Bitcoin experienced a rapid rise in value. People started to make a lot of money by investing in it, so it got a lot of attention not only from the media but also from the biggest players in the finance space such as Goldman Sachs.

Some of the blockchain companies, like Ripple, aim to become a substitute to SWIFT, and they got the attention. “Blockchain offers a void of control, and yet still the ability to trust and be assured that transfers take place. It’s transparent and immutable and, as such, leaves no room for fraud or misdealings”

One of the countries that got behind the blockchain technology in China. China has filed for 41 blockchain patents in the past year, and President Xi Jinping has openly stated that blockchain features in its most recent five-year plan.

IBM is one of the companies that invested a lot of interest in blockchain.

An interesting fact is that IBM machines are still being utilized in 92 of the world’s top 100 banks, therefore they do have the necessary connections and trust to disrupt.

Another big player in the cross-border payments between banks is Ripple. Ripple connects banks and payment providers via RippleNet to provide one frictionless experience for sending and receiving money globally. RippleNet runs on advanced blockchain technology. It is scalable, secure and interoperates with different networks.

Customers have optional access to source liquidity using the world’s fastest and most reliable digital asset for payments: XRP. RippleNet is already used by Santander, MoneyGram, and American Express.

What Stops Blockchain from Taking Over?

Well, the answer is simple - regulation. Lawmakers typically stay behind the curve when it comes to regulating new technologies, and if the new technologies come into highly regulated spaces such as finances, it’s even worse.

“Regulation is key for B2B-payment blockchain networks. The regulation will increase the speed of adoption! Without defined and accepted standards, adoption by industry, companies or businesses will be limited because those sectors need to be confident that the technical solution will also be available soon”

“SWIFT, as we understand it today, has been around for nearly 45 years. With regulation, there also comes enforcement. Even with a B2B blockchain, things can go wrong, and the human factor will most likely be the weak link – be it because of human error in initiating the payment to the wrong recipient, or outright fraud. Where money is transferred, someone will always try to game the system. With the enforcement of the regulation of B2B blockchain networks, the industry will have the confidence of payments being legit, but also a legal process to fall back on if something goes haywire.”

SWIFT might be a legacy system, but it’s proven and trusted. Until blockchain gains the same regulatory certainty, it’s going to be hard to get the level of adoption needed for it to truly blow up.

What is a legacy system, and why do companies keep using them?

Winning the Race to Innovation in Banking Technology 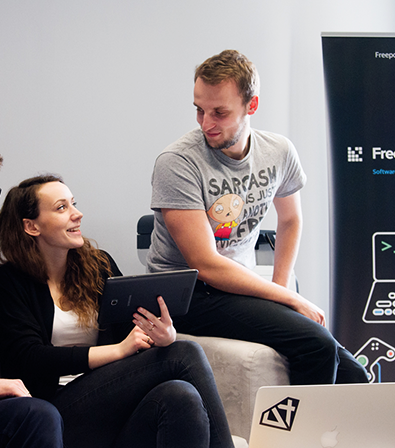 Before you head out, you can download our E-book “5 and a Half Myths of Software Design”