After the fall of the USSR, the CEE Region started to catch up with the West. Years of intellectual oppression created a sense of urgency for people to seek higher education. Poland found itself spearheading this revolution. According to the New York Times, almost 40% of Polish citizens aged 25-34 have university degrees. This puts Poland in the second place in that category among the nearly three dozen countries listed (the United States, at 35 percent, ranks 11th).

Polish Software Engineers are one of the best in the World

Because of the sheer number of graduates and very high standards of education, Polish developers became elite among ICT specialist around the globe. They get the highest ranks in international programming contests, such as Google Code Jam, Microsoft Imagine Cup, the Central European Programming Contest (CEPC), TopCoder (they are currently ranked 5th in the world in the TopCoder ranking), and 3rd at Hackerrank. 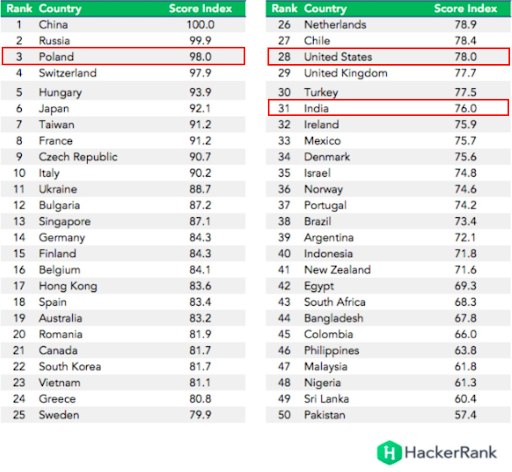 Polish developers use the latest tech

Poland has a new generation of great software engineers who are looking for jobs where they can use new technologies to make cool things. They speak English, but also Agile, Scrum, and Kanban. The time difference isn’t so bad. They love Python, Ruby, Node, and Angular.js. All the startup buzzwords are in full effect, but most of the best developers have experience working for services companies and building MVPs and tech products for large-scale enterprise U.S. clients.

Poland is unlike any other outsourcing destination

Poland has a few other advantages, too. Time zones are serviceable and travel to Poland is easy. The infrastructure is up to the EU standards. Trains are on time and Internet connections are solid. There are slim to none cultural differences and Poland is probably one of the most Americanised countries in Europe. Most of the young people speak English very well, so communication is miles ahead of other competing offshore countries.

On top of all the accolades about the quality of work, the price of the services offered by Polish software houses is also much lower than their US-based counterparts. You won’t find developer rates as low as some other markets, let’s say India, but the reliability and value are often much higher.