On a cold and sunny weekend morning in February, they got up, not to attend their work, children, or gym, but to code. For some it was their first time trying to program, others had tried before but never at such an intense scale.

Excitement and anxious feelings followed most to the 13th floor of the glass building office in Warsaw, where that morning they would become: Rails Girls. This two-day coding workshop has happened annually in Warsaw for the last six years. Originally founded in Helsinki in 2010, Rails Girls is now a worldwide non-profit organization committed to providing women with tools to apply their own ideas through web development. That may sound vague and not easy to relate to. This is the second time FM has sponsored a Rails Girls event, and this year our team went on a mission to find out more about the individuals who attended.

Ruby is the programming language used in the architectural framework known as Rails. In other words whatever you program in Ruby, cannot come to action without Rails. Rails is responsible for transitioning what’s written into the web. It’s also commonly recognised as one of the best choices for beginners. The founder of Rails Girls, Linda Liukas aimed at bringing the abstract programming language closer to home. When trying to implement concepts and solving problems while programming, she created a fictional character and imagined a 6 year old girl named Ruby. When struggling with a solution often she would ask: What would Ruby do?

There was nothing average about the participants. Mothers, wives, students, and career women who all craved the same thing: technology skills and knowledge. Each of them had been carefully selected by the organizers of the workshop, after sharing their personal story of why they should be selected as one of this year’s Rails Girls. Kasia, the mother of two signed up for Rails Girls as part of her desire to re-enter the workforce. Caroline aspired to teach her little boy programming, and Dominika searched for a new career. As I spoke to some of the great women who participated, I found that they were just like most of us were at some time: fascinated by the world of technology, but not very confident about where to start. With Rails Girls they found a place where in two days they were taught how to apply the concepts of design and web development to make their ideas come to life. In other words: they were building something, from scratch! Which is more than most schools or courses can guarantee. Demonstration of practical knowledge is highly attractive for potential employers; with a hands-on attitude and a focus on making rather than theory, the participants created their first web application and got inspired for future development. 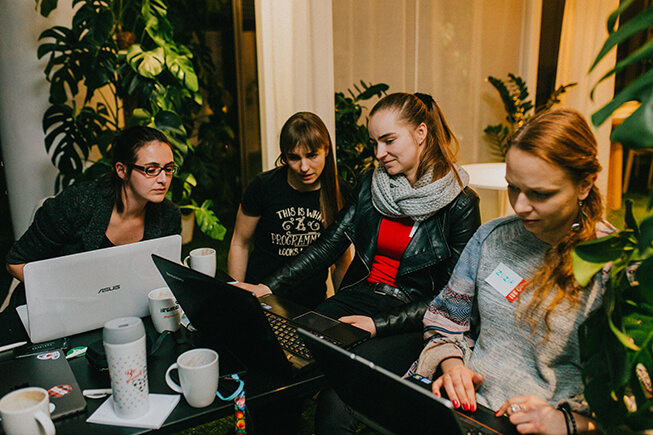 You may be asking “Why aren’t there events like this for guys?” The program primarily targets women , however men are encouraged to apply as well, and this year’s event did include one male participant. The only prerequisite is to be curious about coding. Proving that nothing can stop you if you are determined to learn, those with children were actively encouraged to participate and there were a few toddlers in the mix.. While they did not actively code, some moms have vouched that the knowledge will certainly be passed on.

Nurturing talent and inspiring a career in tech

It was an inspiring event for men and women, who regained their confidence for taking on the demanding job market, believed in their capabilities, and overcame a lot of fears about something that seemed to be mysterious to them: programming. Their journey to becoming a developer is just beginning, but already they have drafted plans for continuing courses online or applying for internships and tech jobs. I was truly inspired seeing the amount of motivation and the positive atmosphere which nurtured talent. And I’m very happy that Freeport Metrics played a role in supporting that. We will continue to support Rails Girls in hopes of bringing the potential out of people.

Taking Up Space In The Room

More Posts In This Series

Taking Up Space In The Room